Peyronie’s Disease: Has life thrown a Curveball at you?

Peyronie’s Disease: Has life thrown a Curveball at you?
Posted on: 23 March, 2019

Our board-certified urologist, Dr. Alex Pastuszak, answers common questions regarding Peyronie’s Disease, a condition that is very frustrating for men. The good news is there are treatment options available at Utah Men’s Health.

WHAT IS PEYRONIE’S DISEASE? IS IT COMMON?

Dr. Pastuszak: Peyronie’s disease is the formation of abnormal scar tissue in the penis, which results in penile curvature and other deformities, and can make sex and reproduction difficult or impossible. Peyronie’s Disease can also cause depression and relationship issues. Peyronie’s disease is probably more coming than current estimates, which put it at 4-13% of the United States male population. A lot of men don’t want to talk about Peyronie’s disease, making them less likely to seek help for it.

Dr. Pastuszak: We are not completely sure, but the current theory is that an injury to the penis or inflammation in the penis causes scar tissue to form. When the scar tissue forms, this causes the penis to curve.

DOES PEYRONIE’S DISEASE EVER RESOLVE ON ITS OWN?

Dr. Pastuszak: Rarely. Research has shown that only about 12% of Peyronie’s disease cases get better on their own. The majority either get worse or stay the same.

IS THERE ANY RELATIONSHIP BETWEEN PEYRONIE’S DISEASE AND ERECTILE DYSFUNCTION?

Dr. Pastuszak: Yes, but whether the diseases are related is not clear. About 50% of men with Peyronie’s also have erectile dysfunction (ED), and some men say that their ED started at the same time as their Peyronie’s.

WHAT MEDICATIONS ARE AVAILABLE?

Dr. Pastuszak: While there are a number of oral therapies available (pentoxifylline, vitamin E, L-arginine, etc.) there is no good evidence that any of these work. There are also drugs that can be injected directly into the Peyronie’s disease scar tissue, such as Xiaflex, verapamil, and interferon, and these can be effective. Whether you are a candidate for any of these will be determined by your doctor.

Dr. Pastuszak: Yes. There are a number of surgical treatments for Peyronie’s disease, all of which can be highly effective. These include penile plication, incision and grafting of the penis, and placement of a penile prosthesis with penile modeling or incision and grafting. The last two types of surgical approaches are best for men with moderate to severe ED. Which surgery is right for you will be determined by your doctor. 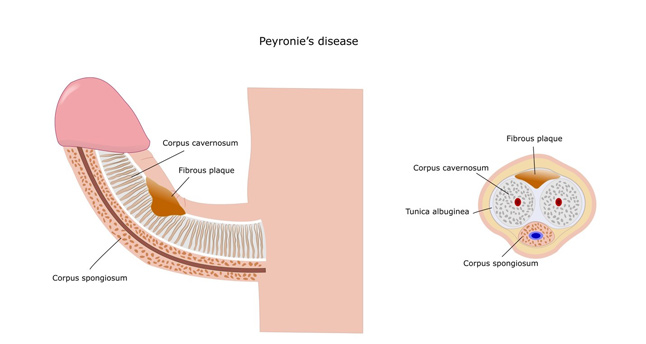